Myth and Symbols of Power

This unit looks at how myths were used by the Greeks and Romans to symbolise political power. Ancient leaders often liked to associate themselves with mythical characters for several reasons: 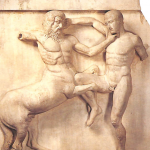 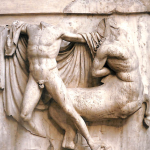 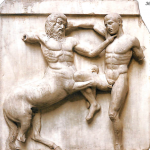 Pericles, Persians and the Parthenon

In 480-479 BC, the city states of ancient Greece united to defeat the second major invasion by the Persian Empire. During this invasion, the Persians occupied Athens and destroyed most of the city, including an older temple dedicated to Athena Parthenos (the first “Parthenon”), which was still under construction.

Thirty years later, Athens had become very wealthy by building a massive navy and getting “protection money” from hundreds of other Greek city states, in case the Persians invaded again.

The Athenian leader Pericles decided to use this money to make Athens great again, and started a massive building programme, the highlight of which was a new Parthenon temple on the Acropolis. He employed the architects Iktinos and Callicrates to design the temple building, and the artist Phidias to decorate it with the finest sculptures.

The metopes of the Parthenon depicted scenes from various mythical battles. The only ones which survive are those depicting the battle between the Lapiths and the Centaurs.

The Lapiths and Centaurs

The Lapiths were a mythical human tribe who lived in Thessaly in central Greece.

According to one myth, a Lapith king called Ixion wanted to seduce Zeus’ wife, Hera. Zeus found out about Ixion’s plans and tricked him by forming a cloud into the shape of Hera. Ixion mated with the cloud, from which the centaurs (half-horse, half-man creatures) were born. The centaurs were wild and uncivilised: they lived in caves, scavenged for food, didn’t drink wine (very strange to the Greeks) and inherited the wild sexual appetite of their father, Ixion, who suffered eternal punishment for his crime.

Ixion’s son Pirithous soon became the king of the Lapiths. Pirithous fell in love with a noblewoman called Hippodamia. He invited the centaurs to the wedding because they were close relations of the Lapiths, and possibly because he felt sorry for them. But the centaurs were wild creatures and were not used to drinking wine, so they got very drunk. Then they tried to abduct Hippodamia, the other female guests, and even the young boys who were at the wedding. A massive fight broke out, which the Lapiths won with help from heroes who came from across Greece to help them, including the Athenian hero Theseus.

The Parthenon metopes as an effective symbol of power:

Bassae is a remote, mountainous location in southern Greece. At some point between 450-400 BC, the local people were affected by a plague. When the plague disappeared, they built a temple for Apollo Epikourios (“Apollo the Helper”). Inside the naos of the temple was a continuous (Ionic) frieze, part of which depicted the battle between Heracles and the Amazons which took place during his Labours, when he went to fetch the belt of the Amazon queen, Hippolyte. 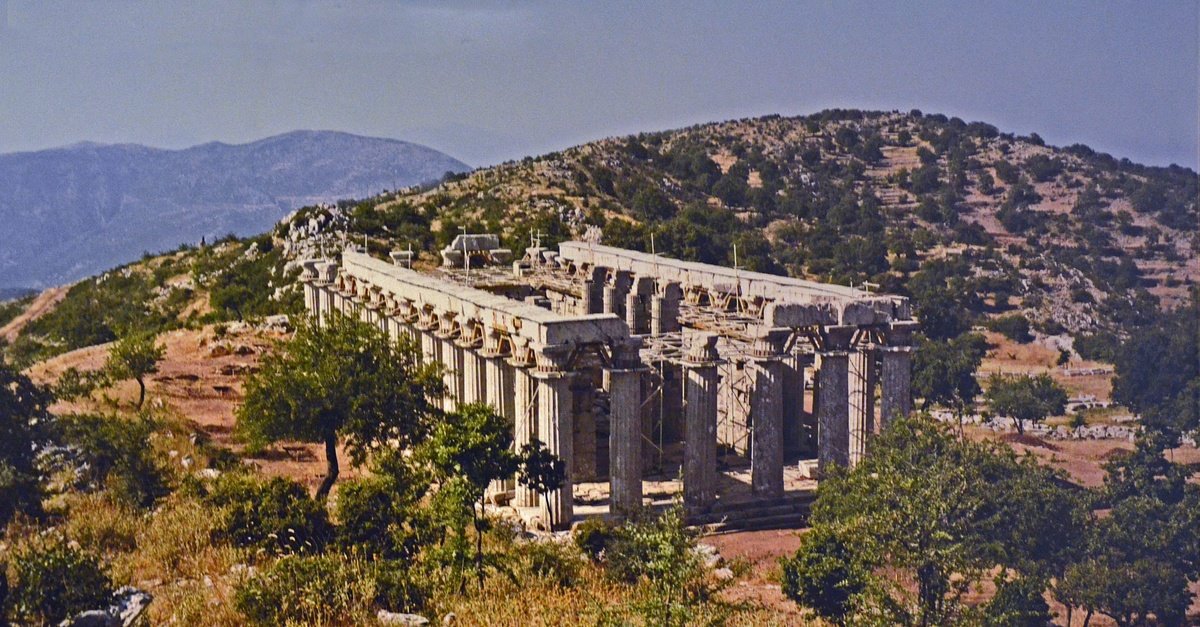 The Bassae frieze as an effective symbol of power:

Augustus was the first Roman Emperor, and the adopted son of Julius Caesar. He was originally called Octavian, but became known as “Augustus” after the title was given to him by the Roman senate in 27 BC.

Before Octavian became emperor, Rome had suffered from nearly 100 years of civil wars. Julius Caesar had tried to end these wars by taking all the power for himself, but he was assassinated by Republicans who did not want a monarchy. However, Caesar had created a template for one-man rule which was fought over by his successors, in particular Octavian and Mark Antony, who had been Caesar’s best friend and ally. Thirteen years after Caesar’s assassination, Octavian and Antony clashed at the Battle of Actium, in 31 BC. Antony was defeated and committed suicide, leaving Octavian as the most powerful man in Rome.

Octavian was not the greatest soldier, but he was a very clever politician, and he often used mythology to promote his power.

This statue of Augustus was discovered at the Villa of Livia (Augustus’ wife) in Prima Porta, a zone on the outskirts of Rome, which was considered the entrance gate to the ancient city (the name Prima Porta means “The First Gate” in Latin). It is believed to be a marble copy of a bronze original which stood in the centre of Rome. The statue is based on a famous ancient Greek statue called the Doryphoros (“Spear-bearer”) by the Greek sculptor Polykleitos. The sculpture is a great example of how Augustus used mythology to promote his political power.

Augustus of Prima Porta as an effective symbol of power

The Ara Pacis was located in the Campus Martius (“Field of Mars”), a large open space next to the River Tiber. In the early days of Rome, the army used to gather on the Campus Martius before and after battle. Later on it was where the people gathered to vote in the Roman elections. It was commissioned by the Roman Senate in 13 BC to celebrate the peace which Augustus had brought to Rome, and his return from successful military campaigns in Hispania (Spain) and Gaul (France). The altar was finally completed and consecrated in 9 BC.

Ara Pacis as an effective symbol of power: