Introduction to the Greek Gods

The ancient Greeks worshipped a large number of gods (such a belief system is called polytheism). Zeus was the king of the gods and held supreme power over all the others. He lived on Mount Olympus with his close relatives; these gods are known as the Olympians. Besides the Olympians, there were hundreds of other minor gods; collectively these gods form the Greek pantheon.

Unlike the gods of many religions, the Greek gods had not existed since the beginning of time, and Zeus was not the creator of the universe. His father, Cronos, belonged to a race of proto-gods called the Titans, who in turn were the offspring of Heaven (Ouranos) and Earth (Gaia). 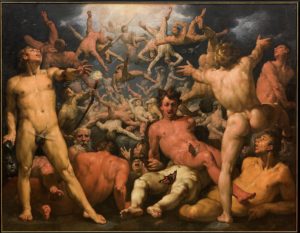 Cronos overthrew Ouranos and later Zeus overthrew Cronos and the Titans. After the gods defeated the Titans, the world was divided between Zeus and his brothers: Zeus took control of the sky, Poseidon the sea and Hades the underworld.

The Greek gods are anthropomorphic, meaning they generally look and act like human beings, or at least enhanced versions of us. This means that they are susceptible to the same flaws as ordinary people, such as jealousy, pride, lust and a desire for revenge.

Most gods have a specific area of influence, for example Aphrodite is the goddess of love and passion. Some are associated with multiple responsibilities, for instance Apollo is associated with the sun, music, prophecy, archery, medicine and male death.

Having a specific god for each aspect of their lives meant that the Greeks could direct their prayers to where they would be most effective, such as praying to Poseidon before a sea voyage. However, honouring multiple gods created the risk that some gods might feel neglected if they were not worshipped enough. The Greek playwright Euripides explored this idea in plays such as the Bacchae and Hippolytus.