Theseus, the hero, reputed son of Neptune, asked Acheloüs why he had sighed, and the reason for his damaged forehead: to which the Calydonian river-god, his uncut hair wreathed with reeds, replied:

‘You ask something painful of me. Who wants to recall the battles he has lost? But, I will tell it as it happened: since the shame of being beaten is no less than the honour of having fought. It is a great consolation to me that the victor was so famous. 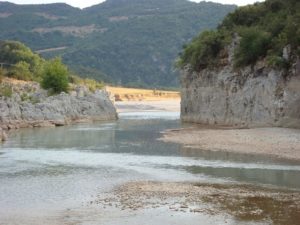 ‘If her name has ever come to your notice, Deianira was once the most beautiful girl, and the jealous hope of many suitors. When, with them, I entered Oeneus’ house, her father, and the man I sought as my father-in-law, I said: “Accept me as your son-in-law, son of Parthaon.” Hercules, scion of Alceus, said the same. The others gave way before the two of us. Hercules declared that he could offer Jove as his bride’s father-in-law, spoke of his famous labours, and of how he had survived what his stepmother, Juno, had prescribed for him. On my side I said: “It would be shameful for a god to concede to a mortal” – He was not yet a god – “In me you see the lord of the waters, that flow in winding rivers, through your kingdom. As your son-in-law I would not be a stranger sent from a foreign shore, but a native, and wedded to your own interests. Only don’t let it harm my case that Queen Juno does not hate me, and all the punishment of the labours, she demanded, passed me by!”

“Now, listen, Hercules, you, son of Alcmena: Jupiter, whose child you boast of being, is either wrongly called your father, or is truly a wrongdoer. You seek your father in a mother’s adultery. Choose whether you prefer this fiction of Jove as a father, or to be born the son of shame.” As I spoke, he gazed at me fiercely, all the while, and unable to act like a man and control his blazing anger, he merely replied in these words: “My right hand is more powerful than my tongue. As long as I beat you at

wrestling, you can win the talking”, and he came at me ferociously. I was ashamed to retreat, after my words: I took off my green robes; put up my arms; held my hands, fingers curved, in front of my chest in fighting stance; and readied my limbs for the match. He caught up dust in the hollow of his hands and threw it over me, and, in turn, was, himself, gilded by the yellow sand. Now he caught at my neck, or you might think he caught me, now at my legs, now at my loins: and attacked me from every side. My weight protected me, and his attempts were useless. I was like a massive pile that the roaring flood assaults with all its might: it remains, secure in its own bulk.

‘We pulled away for a moment, returned to the conflict, and stood firm, determined not to concede. Foot was set against foot, and I pushed at him, with my chest full forward, fingers locked with fingers, and head to head. I have seen two strong bulls come together like that, when they try for the sleekest heifer in the pasture as their prize in the contest. The herd watches in fear, not sure to which one victory will grant overriding supremacy. Three times without success Hercules tried to push my gleaming chest away from him. At the fourth attempt, he broke my grip, loosed himself from my constricting arms, and with a blow of his hand – certainly, I myself confess it is the truth – he turned me about, and clung, with all his weight, to my back. 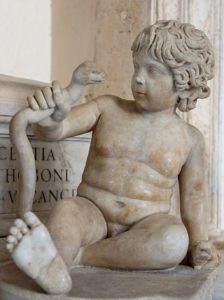 seemed to have a mountain pressing on top of me. With difficulty I thrust my arms, pouring with sweat from the great effort it took, under him, and, with difficulty, freed his firm hold on my body. He pressed me hard, as I gasped for breath, prevented me from gathering my strength, and gripped my neck. Then, at last, my knee touched the ground, and my mouth tasted sand. Inferior to him in strength, I turned to my magic arts, and slipped from his grasp in the shape of a long snake. But when I had wound my body in sinuous coils, and, hissing fiercely, darted my forked tongue at him, Tiryns's hero laughed, and mocking my magic arts, said: “My task in the cradle was to defeat snakes, and, though you are greater than other reptiles, Acheloüs, how big a slice of the Lernean Hydra would your one serpent be? It was made fecund by its wounds, and not one of its hundred heads was safely cut off without 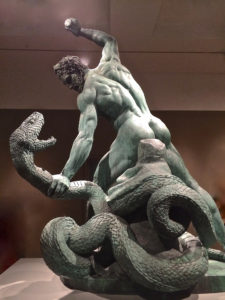 its neck generating two more. I overcame it, and having overcome it, disembowelled that monster, with branching snake-heads, that grew from their own destruction, thriving on evil. What do you think will happen to you, who are only a false snake, using unfamiliar weapons, whom a shifting form hides?”

‘He spoke and knotted his fingers round my throat. I was suffocating, as if my throat was gripped by a vice, and struggled to tear his thumbs away from my windpipe. Overpowered in this form, only my third, fierce, bull-shape remained. So I fought on, my limbs those of a bull. From the left he threw his arms round my bulging neck; and followed me as I charged off; 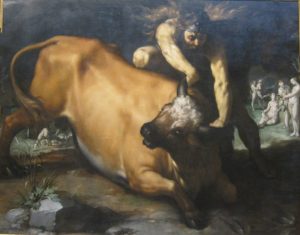 dragging at me, my horns piercing the hard ground as he pulled me down; and toppling me into the deep sand. As if that was not enough, holding the tough horn in his cruel hand, he broke it and tore it away from my mutilated brow. The Naiades took it, filling it with fruit and scented flowers, and made it sacred: the Goddess of Abundance is rich now because of my horn of plenty.”

This story is taken from a compendium of Greek myths, called Metamorphoses, written by the Roman poet Ovid in the 1st century AD. In this story, Theseus is waiting for the waters of the river to subside and is invited to dine by Achelous.

Consider how you would answer the following questions. Click on each question to reveal some ideas for answering them

In what ways is this story similar to the Labours of Hercules?
Does this story portray Hercules in a good light?
This website uses cookies to improve your experience. We'll assume you're ok with this, but you can opt-out if you wish.Accept Reject Read More
Privacy & Cookies Policy