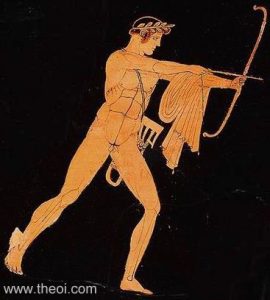 Apollo was the god of music and poetry, prophecy, the sun, plagues, and healing. He was the son of Zeus and Leto, and the twin brother of the goddess Artemis. He was born on the island of Delos, which remained sacred to him throughout ancient Greek history.

As god of music, Apollo is often depicted holding a lyre, a small harp-like instrument which was invented by Hermes and given to Apollo as a gift.

He became the god of prophecy after he destroyed the Python, a monster serpent which guarded the oracle at Delphi. After this deed, Apollo became the guardian of the shrine at Delphi and was in charge of the oracles there.

Apollo can inflict disease on humans. At the start of Homer’s Iliad, there is a plague on the Greek army because Apollo’s priest has been wronged. He is also responsible for the plague at Thebes in Sophocles’ famous play Oedipus the King.

However, Apollo can also cure diseases. After the people of the small town of Bassae were saved from a plague in the 5th century BC, they built a temple in honour of the god (see Myth and Symbols of Power). The Greek god of medicine, Asclepius, was Apollo’s son.

Apollo later became merged with Helios, the personification of the sun. The laurel tree was sacred to him. According to myth, this tree was originally a nymph called Daphne, who was turned into a laurel by Apollo after she rejected his unwanted advances.

Apollo usually appears without a beard in Greek art, indicating that he is more youthful than the other Olympian gods. 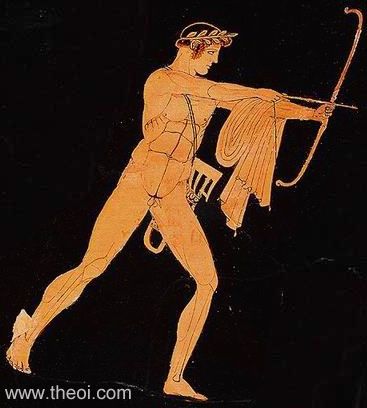