anceps periculum – anceps derives from ambo (“both”) + -ceps (“-headed,” cognate with caput). The danger was two-headed because the collapsing cave could have killed Tiberius and it made Sejanus more influential, since he became even more trusted owing to his heroics. Tiberius therefore dodges only one of the heads. The word can simply mean “hazardous” or “dangerous” as well, in which case anceps periculum is a pleonasm.

vana rumoris = vanum rumorem. The rumour in Rome, that Tiberius was going to die soon, was apparently given more weight by news of this brush with death.

amicitiae constantiaeque – amicitia was the unofficial tie between politicians whereby they would protect each other’s interests; constantia was a fundamental Roman value, embodied in the tales of folk heroes such as Gaius Mucius Scaevola. 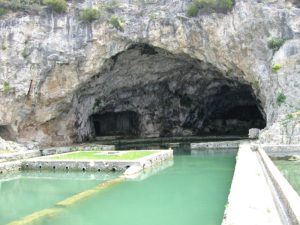 The Latin spelunca means “cave,” and the location has a natural grotto (nativo specu) which was used as the triclinium of an adjacent villa, owned by Tiberius. The Sperlonga sculptures were discovered at the site in 1957, and may well have been commissioned by Tiberius himself. 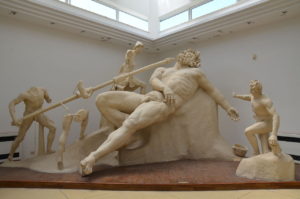 mare Amunclanum…Fundanos montes – the town of Amyclae was deserted by Pliny’s time, apparently having been overrun by snakes (N.H. 3.28). The town of Fundi (modern Fondi) lay around 10 miles to the north.

subsidio – dative of purpose, “(in order) to help.”

fide – repetition (polyptoton) of fideret in the first sentence of the chapter; this time Tacitus makes clear the irony with the concessive clause quamquam exitiosa suaderet.

adsimulabat iudicis partes – “he played the part of judge.” The pretence and deceit of Sejanus is conveyed by the choice of verb and its promotion, and the contrast with fide just before it. Furneaux: “he was the real author of the charges, but set up nominal accusers, and himself affected a judicial or impartial attitude.”

quamquam…tamen… – the young man is portrayed as a tragic character: basically good (modesta iuventa), but flawed (plerumque…oblitum). He was exiled to Ponza in 29 AD for treason, along with his mother.

velle…cupere… – indirect statement to reproduce the (imagined) words of Nero’s advisers (libertis et clientibus). Note the oratorical nature of the Latin as they try to persuade him: balanced phrases and patriotic vocabulary.

And by chance during those days a double-headed danger which presented itself to Caesar increased the empty rumours and provided the man himself with grounds as to why he should have more trust in the friendship and reliability of Sejanus. They were feeding in the villa whose name is “Spelunca”, between the sea of Amyclae and the mountains of Fundi, in a natural grotto. Its mouth, after a sudden rockslide, buried some servants. Hence fear in everyone and the flight of those who were celebrating the feast. Sejanus, suspended above Caesar on both of his knees and his hands, placed himself in the way of the falling debris, and was found in such a position by the soldiers who had come to help. He became more influential due to that and, although he advocated fatal things, he was listened to with confidence, as not being worried about himself. And he played the role of judge against the family of Germanicus, with men delegated to take on the roles of accusers and to attack Nero especially, as he was closest to succession and, although he was a modest youth, nevertheless he often forgot what was appropriate in the present circumstances, all the while being spurred on by his freedmen and clients, who were in a hurry to obtain power, to show himself assured and confident in spirit: they said that the Roman people wished for this, that the armies wanted it, nor would Sejanus dare to oppose it, though currently he was mocking the tolerance of the old man and the inertia of the young man alike.