arto comitatu – ablative either of accompaniment or of quality. Furneaux says: “This scanty retinue still exemplified the classes of which the comitatus principis was usually composed; namely, of amici of the first and second grade, represented by the senator and the knights; and of a third rank of grati (Suet. Tib. 46)…who might be called amici in a less strict sense.”

Cocceius Nerva – grandfather of the emperor Nerva (96-98 AD) and consul (suffectus) a few years earlier, probably in 21 or 22 AD. He committed suicide in 33 AD, in his despair for Rome and with Tiberius begging him to reconsider (VI.26).

Curtius Atticus – he is addressed by Ovid in two of his letters (ex Ponto 2.4; 2.7) and was later destroyed by Sejanus (VI.10). The Curtian family could trace their lineage back to the foundation myths of Rome, hence ex inlustribus. 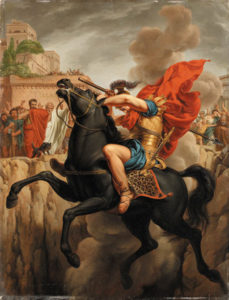 ferme Graeci = ferme omnes Graeci. Suetonius (Tib. 70) says that Tiberius was obsessed with Greek mythology, and would ask trivial questions such as “What songs did the Sirens sing?” and “Who was Hecuba’s mother?”

iis motibus siderum – ablative of circumstance, “under such movements of the heavenly bodies.”

ut – introduces a result clause, “with the result that…”

unde exitii causa – i.e. the prediction that he would not return was true, but many went on to draw the (incorrect) conclusion that this meant Tiberius would soon die.

exitii…finem vitae – there is a certain irony that those predicting death were themselves killed for so doing. Note the contrast between the euphemistic finem vitae and the brutal exitii.

patria careret – a powerful phrase which alludes to exile. Martin and Woodman point out that Cicero uses it several times to describe his own exile. The difference here is that the exile is voluntary (libens).

breve confinium artis et falsi – “the fine line between skill and fraud.” The skill was to foresee the fact that Tiberius would not return, the fraud was to predict his early death.

propinquo…compleverit – Furneaux: “Stress is laid on his frequent proximity to the city as making the fulfilment of the genuine prediction more remarkable, and on his attainment of extreme old age, as signally falsifying the impostor’s inference.”

adsidens – a word more often used for laying siege to a city. Once he abandons Rome, Tiberius behaves more like a hostis than a princeps.

His departure was accompanied by a limited entourage: one senator who had carried out a consulship, Cocceius Nerva, who had legal expertise; a Roman knight from illustrious ranks (other than Sejanus), Curtius Atticus; the rest were endowed with a liberal education, mostly Greeks, by whose conversations he might be amused. Those trained in celestial matters said that Tiberius had left Rome under such motions of the stars that a return would be denied to him. This was a cause of death for many who predicted and publicised a speedy end to his life; for they did not foresee such an incredible situation that he would happily be deprived of his homeland for eleven years. Soon, the fine line between technical skill and fraud was laid bare, and by what darkness the truth was concealed. For it was not said by chance that he would not return into the city: as for the rest they acted in ignorance, since he passed his extreme old age in the nearby countryside, or on the shore, and often stationed by the walls of the city.