dispersas…cohortes – there were nine such cohorts, of about 500 soldiers each. Six cohorts were stationed outside the city walls, the other three in different locations within the city. One cohort, the plainclothes cohors togata, offered close and continuous protection of the emperor.

una in castra – the Castra Praetoria, situated between 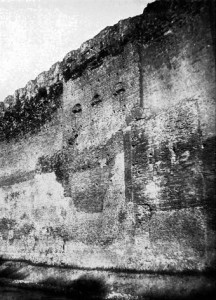 the Viminal and Colline gates.

numeroque et robore et visu – the tricolon and polysyndeton together give the sense of Sejanus forcing home his argument.

fiducia…metus – the contrast of these words is reinforced by a chiasmus and variatio: dative (ipsis) ~ prep. + accusative (in ceteros).

praetendebat – the deceit is consistent with the description of Sejanus’ character at the end of the last chapter, and accentuated by the promotion of the verb.

quid subitum – Sejanus preys on Tiberius’ fears of external and internal dangers to get his way, somewhat ironic considering the threat he will pose to Tiberius’ administration.

pariter – a condensed form of si (miles) pariter subvenisset. As well as economy of expression, the lack of a second conditional clause effects variatio.

subveniri – impersonal passive; present in form but future in meaning.

procul – the camp was actually close outside the city walls. procul does not necessarily signify at a great distance, but that additional meaning only helps Sejanus’ argument here.

inlecebris – emphatic because it closes not only the sentence, but also a long chiastic arrangement (si quid…subveniri…acturos…si vallum…).

inrepere – historic infinitive, for incipient action: “he began to insinuate himself”. repo (cognate with “reptile” and “serpent”) is most commonly used of creatures; the compound inrepo describes the onset of poison. In one word Tacitus paints a damning picture of Sejanus’ actions.

ipse deligere – this went beyond his remit as praefectus praetorio.

neque senatorio ambitu abstinebat – “nor did he refrain from courting the senators”. Note the use of the adjective senatorio in place of a noun (as with militares above). ambitus is literally “a going round”.

clientes – such is the social perversion under Tiberius’ rule that an eques has become a patron of the senatorial class.

facili Tiberio – ablative absolute. facili and (especially) prono suggest that Tiberius has become subservient to Sejanus, in a further corruption of social order.

non modo in…sed apud… – the emphasis is firmly on the second point. Such regrettable behaviour recalls saevientibus vires praebere from the previous chapter.

interque principia legionum – added emphatically. The headquarters of the legions were a place of sanctity (cf. I.39). According to Suetonius, only the legions of Syria refused to honour Sejanus (Tib.48) and were rewarded for their apprehension after his fall.

He amplified the previously moderate power of the prefectship by bringing together into one camp the cohorts, which had been scattered throughout the city, so that they might receive orders in unison and, due to their number and strength and the sight of each other, among them confidence might rise, while fear rose in others. He alleged that a dispersed soldiery was frisky, that if something unexpected arose, combined assistance was a greater help; and that the men would behave more seriously, if the camp was situated far from the enticements of the city. When the camp was complete, he gradually began to creep into the hearts of the soldiers by approaching them and calling them by name; at the same time, he personally selected the centurions and tribunes; and by courting the senate he allowed his clients to be furnished with honours and provinces, while Tiberius was so lax and accommodating that he celebrated him as an “ally of toils” not only in conversation, but in front of the senators and the people, and he allowed his statues to be worshipped throughout the theatres and the forums and among the headquarters of the legions.

How does Tacitus portray Sejanus’ rise to power in this passage?

dispersas…cohortes – there were nine such cohorts, of about 500 soldiers each. Six cohorts were stationed outside the city walls, the other three in different locations within the city. One cohort, the plainclothes cohors togata, offered close and continuous protection of the emperor.

una in castra – the Castra Praetoria, situated between the Viminal and Colline gates.

The red-brick tower with three windows is part of Sejanus’ Castra Praetoria. It was incorporated into the surrounding Aurelian Walls in the 270s.

numeroque et robore et visu – the tricolon and polysyndeton together give the sense of Sejanus forcing home his argument.

fiducia…metus – the contrast of these words is reinforced by a chiasmus and variatio: dative (ipsis) ~ prep. + accusative (in ceteros).