Quae cuncta – i.e. the system of government which Tacitus has detailed, in a generally positive tone, in Chapters 4-6.

horridus…formidatus – even when complimenting Tiberius, Tacitus undermines that praise with an unfavourable description.

dum superfuit…mansere – this is a repetition of the sense of retinebat…verterentur. Tacitus is keen to stress that Drusus’ death was a turning point in Tiberius’ reign.

notescere volebat – Tacitus is looking to explain why it took Sejanus so long to begin his assault on the royal family. He had been Prefect for eight years at this stage.

querens – note the change of subject. This introduces a long sequence of oratio obliqua (“indirect statement”) detailing the complaints which Drusus made about Sejanus. The latter got to hear about this mud-slinging due to the reasons given in the last sentence of this chapter.

non occultus odii – “who made no secret of his hatred” (lit. “not hidden in respect of hatred”). Tacitus is fond of the genitive of respect after participles and adjectives.

set – an alternative, and perfectly viable, form of sed.

incolumi – “unharmed” in the sense of “alive and kicking” – steeped in dramatic irony.

adiutorem imperii – not an official title, but one which summarises the power Sejanus had now acquired. It chimes with Tiberius’ use of socium laborum in Ch. 2.

quantum superesse ut collega dicatur! – “how small a step remained until he was called colleague!” A vivid exclamation of Drusus’ outrage. Sejanus effectively became collega in 31 AD, when he was appointed consul. He was executed very shortly afterwards.

sponte praefecti – “at the Prefect’s bidding alone”. Drusus could be exaggerating, of course.

in monimentis Cn. Pompei – i.e. the theatre of Pompey, 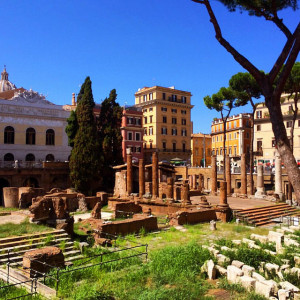 originally constructed in 55 BC. It was currently being rebuilt.

communes nepotes – the offspring who might have come from the proposed marriage, in 20 AD, between Sejanus’ daughter Junilla (who was just four years old at the time) and Claudius’ eldest son (III.29) The latter died, according to Suetonius, by choking on a wild pear just a few days after the betrothal (Cl. 27). Junilla was killed in the purge which followed her father’s fall.

precandam – Drusus’ point is that Sejanus’ ambition is now unstoppable. They can only pray that he is a merciful tyrant who shows restraint (modestiam) and is gratified (contentus) without resorting to terror. Despite the sarcasm in his remark, Drusus comes across as particularly tragic here.

uxore – the ablative of instrument is used (without ab) because Drusus’ wife Livia is no more than an instrument in Sejanus’ scheme, according to Tacitus.

All these things, not indeed in a gracious way, but grimly and for the most part dreadfully, he nevertheless observed, until they were overturned by the death of Drusus: for as long as he survived, they lasted, because Sejanus, whose power was just beginning, wanted to become known for good advice and he feared an avenger who made no secret of his hatred, but who frequently complained that, while the son was alive, another was being called “assistant in command”. And how little there was to go until he was called colleague! The first hopes of being in control were difficult; but once you had started, support and helpers were at hand. That already a camp had been constructed by the will of the prefect, soldiers had been placed in his hands; his statue was seen in the memorials of Gnaeus Pompeius, that he would have grandsons in common with the family of the Drusi. Henceforth there was need to pray for moderation, and that he might be content. He hurled such remarks neither on rare occasions nor in front of small audiences, and besides, his secrets were being betrayed by his corrupted wife.