inter quae – i.e. the discussions in the Senate about which Asian city should be selected to erect a temple to Tiberius (Ch.55-56).

in Campaniam – supply a verb of motion such as iit or concessit.

specie – the third appearance of this word in the prescribed text (cf. Ch.3 and Ch.8). Again, Tacitus focuses on the dissimulation of Tiberian Rome.

apud Capuam Iovi – the temple is called “Capitolium” by Suetonius (Tib.40) and it lay next to the Appian Way. The modern Italian comune of Casagiove (“House of Jove”) is named after it.

apud Nolam Augusto – built on the house where Augustus died, on 19th August 14 AD, allegedly in the same room as his father had died (Suetonius, Aug. 98).

quamquam…ad artes Seiani – this concession seems to contradict diu meditato consilio at the start of the chapter, but is consistent with Tiberium…impelleret in Ch.41. As Martin and Woodman point out, these two reasons for Tiberius’ departure are not mutually exclusive.

caede eius patrata – the subordination of this phrase is dismissive. For all his influence in this period, Sejanus will be dispatched soon enough.

permoveor – “I hesitate,” or “I am moved by doubts.” A rare and unusual verb to introduce the hypothesis that Tiberius’ retirement was really down to his wanting a place to hide his proclivities.

corporis quoque – i.e. some people believed he went into seclusion because of his physical appearance as well as to hide his vices.

pudori – a predicative dative, “a source of shame.”

illi…interstincta – an unflattering, if not hideous, description, which contrasts sharply with the images of him which have survived, especially the one kept in the Vatican. 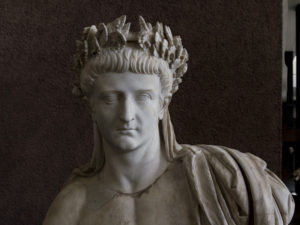 Note how Tiberius’ exceptional height, which could otherwise be a handsome quality, is made unattractive here by the adjectives praegracilis and incurva.

et Rhodi – picks up saevitiam ac libidinem occulantem, after the digression on his physical appearance. Tiberius withdrew abruptly to the island of Rhodes in 6 BC for reasons not entirely clear, returning to Rome in 2 AD. Tacitus has previously claimed in the Annals that it was through hatred of his second wife, Julia (I.53).

traditur – this reason for his current retirement is also given by Suetonius (Tib. 51) and Dio (57.12), both of whom give more details of their quarrels. For instance, Suetonius says Augusta read out letters from Augustus she had preserved, in which he complained about Tiberius’ sourness and insolence. Tiberius was especially upset that Augusta had kept the letters so long just to attack him.

exprobrabat, reposcebat – the asyndeton shows how demanding back her power was very much part of Augusta’s taunting; the imperfect tense conveys the frequency of her psychological abuse.

Meanwhile, after his plan had been considered for a long time and quite often postponed, at last Caesar retired into Campania, under the pretext of dedicating temples to Jupiter at Capua, to Augustus at Nola, but was resolved on living far from the city. Although I have followed most of the authorities in ascribing the cause of his withdrawal to the arts of Sejanus, nevertheless, because he spent six continuous years in similar seclusion after his slaughter had been achieved, I am often disturbed by doubts whether it is more truthful to be ascribed to himself, concealing his savagery and lust in his location, although exhibiting them in his deeds. There were those who believed that, in his old age, the appearance of his body had also been a source of shame: indeed he had a very slender and stooping height, a head stripped of hair, a face which was ulcerous and mostly patched with cosmetics; and in the seclusion of Rhodes he had become accustomed to avoid crowds and to hide away his pleasures. It is even recorded that he was thrust out by the bloody-mindedness of his mother, whom he spurned as his partner in power, but could not drive away, since he had received her power as a gift. For Augustus had considered putting Germanicus, his sister’s grandson and lauded by everyone, in charge of the Roman state, but he was won over by the entreaties of his wife and had Germanicus adopted by Tiberius, Tiberius by himself. And Augusta used to make jibes about this, and demand it back.