laudante filium pro rostris – The writer and political adviser Seneca describes this scene in some detail in his Consolation to Marcia (Cons. ad Marc. 15.4). He upholds Tiberius’ losses (Germanicus and Drusus) as one example of a parent outliving his or her offspring, from which Marcia should take comfort. He might even have witnessed the scene himself as a young man. He says that Tiberius made the address from the Rostra, with Drusus’ dead body lying next to him on full view, and Sejanus by his side.

induebat – Martin and Woodman interpret this as the incipient use of the imperfect, i.e. the people began to mourn as Tiberius was making his speech. This further implies insincere mourning, as the crowds are relying on prompts rather than grieving voluntarily. 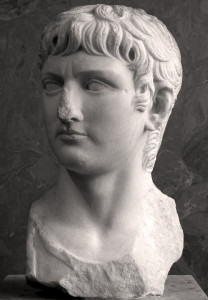 mater…spem male tegens – this whole phrase acts like a noun. Such use is rare with the present participle (though very common with the perfect participle).

sine maerore publico – presumably, a strong public response to Drusus’ death would have necessitated a long interval before the next crime (cf. Ch. 3: dolus intervalla scelerum poscebat). As it is, Sejanus moves on quickly to his next victim.

ferox scelerum – a marked juxtaposition, underscored by the rarity of the (objective) genitive with ferox. Sallust uses a similar expression, sceleribus…ferox (“emboldened by crime”), for the Numidian king Jugurtha (Jug. 14.21).

spargi venenum – a reference to Catiline and his henchmen in Cicero’s famous speech (Cat. 2.23: spargere venena didicerunt). Fittingly, the verb can mean “distribute” as well as “sprinkle.”

in tres – the number now includes the youngest brother, Gaius.

egregia…impenetrabili – a neat chiasmus. The ablatives are absolute, with a sense of causation.

superbam fecunditate – although Livia Augusta had two sons by a previous marriage (Tiberius and Drusus the Elder), she had none by her second and final husband, Augustus, despite her being just 19 years old when they married. The failure to provide Augustus with a 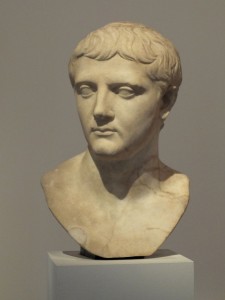 biological son who could inherit the principate must have been hard for her take (she is recorded to have miscarried at least once trying). It is not hard to imagine Agrippina’s three healthy sons being a cause of envy, especially after Drusus the Elder died in 9 BC, aged 29. Drusus’ wife Livia only had one son who managed to survive early childhood (Tiberius Gemellus).

inhiare – as well as “gaze at eagerly” this verb describes the action of a gaping mouth. The metaphor is striking, the accusation vicious.

apud Caesarem – qualifies arguerent: they were attacking Livia in front of Tiberius, behind her back.

haec – ambiguous. See note at the foot of the translation.

callidis criminatoribus – these people are dehumanised as instruments rather than agents (by the omission of the preposition a).

Mutiliae Priscae – the wife of Gaius Fufius Geminus, who became consul in 29. Not long afterwards, according to Dio (58.4, 5-6), both committed suicide, possibly because they were left without protection after Livia Augusta’s death, also in 29.

in animo…valida – “was strong in Augusta’s affections.” A similar phrase is used for Nero’s praetorian prefect later on in the Annals (XIV.51: validior Tigellinus in animo principis).

suapte natura – “by her very own nature.” suapte is an emphatic form of sua.

inliciebantur – “were enticed.” Needless to say, these turncoats were not spurred on by any virtuous stimuli.

pravis – a particularly seedy word. “Depraved” is both cognate and a suitable translation.

perstimulare – only appears here in Latin. Martin and Woodman say that the whole phrase tumidos spiritus perstimulare suggests “the goading of a proud animal.”

But while Tiberius was praising his son in front of the Rostra, the senate and the people put on the manner and voices of people grieving, through pretence rather than willingly, and secretly they were happy that the house of Germanicus was being renewed. But this beginning of popularity and the mother, Agrippina, badly concealing her hopes, only hastened its ruin. For Sejanus, when he saw that the death of Drusus was unavenged on the killers and without public sorrow, became bold in crime and, because the first had succeeded, wondered to himself in what way he might overthrow the children of Germanicus, whose succession was not in doubt. Nor could poison be doled out to three people, due to the outstanding loyalty of the guards and the impenetrable chastity of Agrippina. Therefore he made an assault on her stubbornness, and stirred up Augusta’s old hatred and the recent complicity of Livia so that they would criticise her in front of Caesar for being proud in her fertility, propped up by popular support and gagging for power. And Livia*, by means of skilled slanderers, among whom she had chosen Julius Postumus, who through his adultery with Mutilia Prisca was among the grandmother’s innermost friends and very well-suited to Livia’s plans, because Prisca had influence over Augusta’s mind, and she made the old woman, who by her very nature was anxious about her own power, inhospitable to her grandson’s wife. Even those closest to Agrippina were enticed to provoke her inflated arrogance with mischievous conversations.

* haec here is ambiguous. It could be feminine nominative singular and refer to Drusus’ widow Livia, or it could be neuter accusative plural and mean “(Sejanus did) these things”. Martin and Woodman take it to mean the latter, whereas many authorities take it to mean the former. I have gone with the former in the translation, but you can decide for yourself. The two meanings are not wholly divergent: remember that Livia is now, according to Tacitus, an “instrument” of Sejanus (see note in Ch.7), so behind any of her actions lurks Sejanus as mastermind.