πρόπαν ἦμαρ ἐς ἠέλιον καταδύντα – “for the whole day, until the setting of the sun” – tautologous to highlight for just how long they were feasting. This phrase reminds the audience of Hephaestus’s πᾶν δ᾽ ἦμαρ … ἠελίῳ καταδύντι (592), and encourages us to contrast Hephaestus’s day-long fall, resulting from a divine argument, with the gods’ day-long feast, after the close of a divine argument.

οὐδέ τι θυμὸς ἐδεύετο δαιτὸς ἐΐσης – reminds the audience of οὐδέ τι δαιτὸς (575), again encouraging us to compare and contrast then with now. Whereas at that point the quarrel between Zeus and Hera threatened the pleasure of the divine feast, now their hearts are so gladdened by it that they could wish for nothing more.

περικαλλέος – “exquisite”. The prefix περι- intensifies καλλέος, and highlights just how beautiful Apollo’s music was. Use of the adjective καλῇ to describe the reply of the Muses is in itself a kind of grammatical reply, as it is a cognate of περικαλλέος. 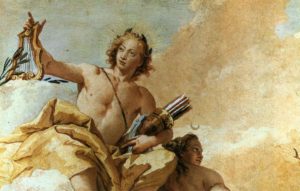 κακκείοντες – future participle to convey purpose – “they each went home to lie down”.

ὅτε μιν γλυκὺς ὕπνος ἱκάνοι – “whenever sweet sleep came to him”. This indefinite clause suggests that Zeus slept in the same place every night, no matter what trials and tribulations he might have faced during the day. The fact that this occasion is no exception suggests a sense of resolution – the quarrel has ended, and the gods can bed down as normal.

παρὰ δὲ χρυσόθρονος Ἥρη – “Hera of the golden throne lay beside him” – the ultimate sign of domestic and political concord. The choice of epithet is pertinent – it makes it sound like now that Hera has made concessions to Zeus, she has regained her dignity amongst the gods (Pulleyn 2000:277).

The book thus ends on a note of apparent resolution (‘apparent’ because this quarrel is certainly not the last of the divine quarrels in the Iliad!).

So then for the whole day, until the setting of the sun,
they feasted; no heart desired anything more from the equally divided feast,
nor from the exquisite lyre, which Apollo held,
or the Muses, who sang with a beautiful sound in response.
But when the shining light of the sun set,
they each went home to lie down,
where bow-legged Hephaestus of the great renown had fashioned a house
for each of them with his knowledgeable understanding.
But Zeus the Olympian god of lightning went to his own bed,
where he had taken rest on previous occasions whenever sweet sleep came to him.
After climbing in, he slept there, and Hera of the golden throne lay beside him.