ἀνάσχεο – an aorist imperative to show that Hera must tolerate Zeus’s behaviour just this once (Pulleyn 2000:270). Hephaestus is keen to make his demand seem like less of a commitment in order to encourage Hera to accept it.

μῆτερ ἐμή … φίλην περ ἐοῦσαν – Hephaestus is at pains to emphasise the affection he holds for his mother, with the aim of showing that everything he says is in her best interests. This is part of his attempt to make her more likely to follow his suggestions.

κηδομένη περ – “even though you are troubled”. By accepting that it won’t be easy, Hephaestus shows understanding of his mother’s situation.

οὔ τι δυνήσομαι … χραισμεῖν – οὔ τι is totalising, giving the impression that Hephaestus will not be able to offer even a shred of help against superior forces.

ἤδη γάρ – “for already once before…”. γάρ signposts that Hephaestus is about to launch into an explanation. His use of a personal anecdote for evidence fits into common Greek rhetorical practice – anecdotes and historical exempla, whether personal or not, were often used to bolster an argument. This anecdote probably refers to the time when Hera cast a storm upon Zeus’s son Heracles. Zeus punished Hera by hanging her from Mount Olympus, and (temporarily) expelled Hephaestus from heaven for trying to help her (Kirk 1985:113).

ποδὸς τεταγὼν – there is something rather brutal about inverting Hephaestus and seizing him by the foot rather than just seizing him.

πᾶν δ᾽ ἦμαρ φερόμην – a long time to be falling for! πᾶν is promoted to the start of the line to highlight the duration of his fall, and use of the passive φερόμην effectively conveys Hephaestus’s lack of control over his own motion. 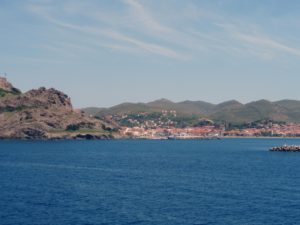 ὀλίγος δ᾽ ἔτι θυμὸς ἐνῆεν – this phrase suggests that Zeus’s might nearly killed him. Emphatic placement of ὀλίγος underscores how very little life he had left in him when he finally dropped down on Lemnos.

Σίντιες ἄνδρες – the Sintians were a pirate people who worshipped Hephaestus. 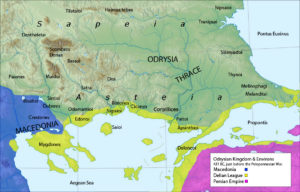 ἐδέξατο χειρὶ κύπελλον – Hera accepts the cup Hephaestus used in persuading her – a sign that she accepts his arguments too. Her smiles (μείδησεν … μειδήσασα) also suggest that she has taken her son’s advice well – though Pulleyn suggests that they mask her true feelings, given that the words μείδησεν and μειδήσασα are also used in deception scenes later in the Iliad (Pulleyn 2000:272).

ἄσβεστος δ᾽ ἄρ᾽ ἐνῶρτο γέλως – smiles turn to laughter as seriousness gives way to light-heartedness. ἄσβεστος is promoted to the start of the line to emphasise that the gods cannot stop laughing at Hephaestus.

ποιπνύοντα – an incongruous image – a word often used for attendants is here used of a god. Furthermore, it was generally for the young and able-bodied to pour wine (as Ganymede and Hebe do later on in the Iliad); the image of a lame man performing the task is enough to provoke some hilarity (Kirk 1985:113). This makes for a light-hearted, almost comical close to the book.

He spoke thus, and he leapt up and placed a double cup
in the hand of his dear mother, and he spoke to her.
‘Put up with it, my mother, and tolerate it even though you are troubled,
lest I see you struck down in front of my eyes,
beloved as you are – then I will not be able to do anything in your defence
despite my grief. For the Olympian is troublesome to oppose.
For already once before, when I strove to defend you,
he seized hold of my foot and threw me from the divine threshold,
and I was borne along all day, and when the sun set
I fell on the island of Lemnos, but there was little life left in me.
Immediately after my fall, Sintian men there took care of me.’
This is what he said, and the white-armed goddess Hera smiled,
and smiling, she took the cup from her son with her hand.
Then from left to right he poured sweet nectar out
to all the other gods, drawing it out from the mixing bowl.
But at this, unstoppable laughter rose up amongst the blessed gods,
when they saw Hephaestus bustling about in the palace.