δαιμονίη – a term of gentle reproach for a loved one. Hard to translate – lit. “divinely possessed one”, but with the meaning “my dear, what has got into you?” A fairly amicable start to a speech that is soon to become increasingly colder and more threatening.

δυνήσεαι … ἔσεαι … ἔσται – these future tenses show that Zeus’s decision to help Thetis is fixed and certain (and therefore so is the resulting deterioration in relations with Hera). ἀπὸ θυμοῦ μᾶλλον ἐμοὶ ἔσεαι is particularly cool in tone.

ἀλλ᾽ ἀκέουσα κάθησο, ἐμῷ δ᾽ ἐπιπείθεο μύθῳ – Zeus now becomes more forceful, ordering Hera into submission with these two imperatives. ἀκέουσα shows that Zeus is not even allowing Hera the licence to speak: she must be totally passive.

μή … ἐφείω – Zeus concludes with a chilling threat to attack Hera along with all her supporters if she refuses to pipe down. μή νύ τοι οὐ χραίσμωσιν echoes the words used by Agamemnon when threatening Chryses (28). The audience will remember that that argument caused a plague and countless deaths amongst the Achaeans, and thus this allusion raises the amount at stake (Pulleyn 2000:264). Use of ὅσοι (“all, as many as there are”) shows that Zeus does not care about the numerical strength of her supporters; he is confident of defeating them all regardless. He describes his hands as ἀάπτους (“invincible”) – another sign of his self-assurance. No wonder Hera falls silent after this.

καί ῥ᾽ ἀκέουσα καθῆστο – Homer describes Hera’s actions using almost exactly the same words as Zeus used in his command four lines earlier. This gives the impression that Hera was so afraid that she obeyed Zeus to the very letter.

ὄχθησαν – Zeus and Hera’s quarrel appears to have caused some unrest amongst the other gods. Homer promotes ὄχθησαν to first word in its line to underline their anxiety.

μητρὶ φίλῃ ἐπίηρα φέρων – here, Homer diverges from his most common speech-introducing formulae and instead introduces Hephaestus’s speech with an interesting line that stresses his close familial relationship with Hera. By doing this, Homer increases the emotional impact of the lines that follow.

ἦ δὴ λοίγια ἔργα – a direct repetition of the first half of 518, where matters are λοίγια because they will cause upset to Hera – but this time there is more at stake as the quarrel could end up causing harm to Hera, as well as major upset to all the rest of the gods. This is stressed by the addition of οὐδ᾽ ἔτ᾽ ἀνεκτά (nor will it be tolerable any longer).

θνητῶν … θεοῖσι – mention of men and gods in such close succession sounds almost ludicrous: why should the pleasure of all the gods to be diminished by a quarrel over mere mortals? Hephaestus argues that it should not. 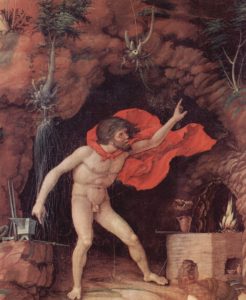 κολῳὸν – “brawling” – a derogatory word for Zeus and Hera’s quarrel which stands out all the more for being a Homeric hapax.

τὰ χερείονα – “inferior matters”. Hephaestus is reiterating that the matter being debated is far too insignificant to warrant any hindrance to the pleasure of the gods.

αὐτῇ περ νοεούσῃ – a quick parenthesis in support of his mother’s good sense, in case she should take offence at the fact that her son is trying to lecture her.

εἴ … στυφελίξαι – “for if the Olympian god of lightning should wish to thrust us away from our seats…”. This conditional is lacking its second half; supply “he would be able to” (perhaps Hephaestus is reluctant to state it outright, in case he inadvertently makes it happen?).

ἀστεροπητὴς – “god of lightning”. Hephaestus’s choice of such a formidable epithet for Zeus here is likely to be deliberate and part of his attempt to persuade Hera that it would be unwise to resist him (Pulleyn 2000:268).

ἐξ ἑδέων στυφελίξαι – Zeus has de-seated the other gods ἐξ ἑδέων once already (534); though he was not angry at the time, he still caused quite a stir. The verb στυφελίξαι gives us a vivid image of the havoc that could be wrought this time if Hera were to stand her ground.

ἐπέεσσι καθάπτεσθαι μαλακοῖσιν – “accost him with gentle words”. Hephaestus’s choice of the verb καθάπτεσθαι is an interesting one; it is often used of reproach or attack, but here of a gentler approach. Hephaestus opts for the imperatival infinitive to exhort his mother to action. The direct address σὺ adds additional impact.

Cloud-gathering Zeus spoke to her in response to this.
‘O my wretched wife, you are always ‘suspecting’ – and I haven’t escaped your notice.
In any case, though, you aren’t able to do a thing about it, but you shall only move
a greater distance away from my heart. And that shall be even less pleasant for you.
If the matter is so, then it is doubtless pleasing to me.
But be quiet and sit down, and abide by what I say,
lest all the other gods there are in Olympus be incapable of warding me off
as I come nearer to lay my invincible hands down upon you.’
Thus did he speak, and wide-eyed Lady Hera was afraid,
and then she sat down in silence, and bowed her heart in submission.
In the house of Zeus, the gods, the heavenly ones, were vexed in spirit.
Hephaestus, famed for his skill, was the first amongst them to speak,
bringing sweet words of kindness to his beloved mother, white-armed Hera.
‘This business certainly will be deadly, nor will it be tolerable any longer,
if the two of you quarrel in this way over mortals,
and drive your brawling in amongst the gods. There will be no pleasure
to our fine feasting while inferior matters prevail.
And I advise my mother – even though she thinks straight herself –
to bring sweet words of kindness to dear father Zeus, so that our father
may not chide her again, and cast our feasting into disarray.
For if the Olympian god of lightning should wish
to thrust us away from our seats [he would be able to]; for he is by far the strongest.
But you – accost him with gentle words.
The Olympian will then straightaway be well-disposed towards us.’