κυανέῃσιν … ἀθανάτοιο – this description, according to Willcock, makes Zeus sound like a storm cloud itself: the dark brows represent its underside, and the hair represents the wispy clouds spreading from the top (Willcock 1970:32). Kirk draws attention to the sonorous words and phrases used (κυανέῃσιν, ἀμβρόσιαι, ἐπερρώσαντο, κρατὸς ἀπ᾽ ἀθανάτοιο).

ἀμβρόσιαι … Ὄλυμπον – two-line description of the consequences of this action highlights its importance.

τώ … βουλεύσαντε διέτμαγεν – the words are written in the dual, a third type of grammatical number (in addition to the singular and the plural) used to refer to pairs of people or things. This is not on the current GCSE syllabus.

πάντες ἀνέσταν … ἔσταν ἅπαντες – Homer uses a neat chiastic construction to describe how the other gods rise as Zeus enters. This draws attention to these lines, and emphasises the authority of Zeus and the deference of the other gods to him. Near-repetition of πάντες … ἅπαντες conveys the unanimity of their deference.

κερτομίοισι – “stinging, reproachful” but also with overtones of “taunting, sneering”. Hera’s tone is unpleasant in every way. 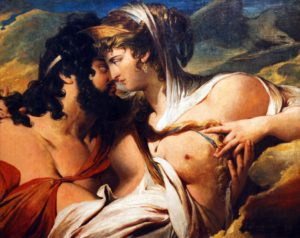 αὖ ~ “who was it this time?”. Suggests that this is only the most recent in a whole series of similar incidents. Note that by asking who it was, Hera is being devious – she later (555) reveals her knowledge that it was Thetis who came to speak with Zeus.

δολομῆτα – Hera addresses her husband as a “crafty so and so”. This insult is all the more colourful as it is the only instance of the word in the Iliad.

φίλον ἐστὶν – Hera is insinuating that not only is it is custom to conceal his plans from her, but he also takes pleasure from it. Hera clearly enjoys demonising Zeus.

αἰεί … οὐδέ τί πώ – Hera twice makes the point that this is not a one-off occurrence.

τέτληκας – Hera’s use of τέτληκας makes it sound as though that Zeus has been plotting something so bad that he does not even dare to speak of it (Pulleyn 2000:259).

The son of Cronus spoke, and he nodded his assent with his dark eyebrows.
The lord’s divine locks of hair flowed down
from his immortal head, and he caused great Olympus to shake.
After their discussion, the two of them parted. Thetis then leapt
from radiant Olympus into the deep sea,
while Zeus went to his own home. And the gods all stood up from their seats
together before their father. Not one of them dared stay put
as he came upon them, but they all stood before him,
and so he sat down there upon his throne. But Hera was not unaware,
as she had seen that silver-footed Thetis, the daughter of the old man of the sea,
had contrived plans with him.
Straight away she spoke to Zeus, son of Cronus, with cutting words:
‘So which of the gods was it who contrived plans with you this time, you crafty so and so?
You always find it pleasing to make your judgements when you are far apart from me
and thinking secret thoughts – nor have you ever willingly dared
to tell me a word of what you are devising.’