οὔ τι προσέφη – a totalising phrase: Zeus is completely at a loss as to what to say. The suggestion is that there is no easy way out of the complex situation he is in.

ἀλλ᾽ ἀκέων δὴν ἧστο – this reinforces the previous phrase. Not only was he silent (ἀκέων), but for a long period of time (δὴν).

δεύτερον αὖτις – hyperbolic phrase, emphasising that Thetis feels so strongly that she feels she must make a second appeal.

νημερτὲς – “infallibly”. This is a strong word, and its position as first word in the line lends it additional force. This makes for a strong start to Thetis’s second appeal, and shows that she will not settle for half-hearted promises.

ὑπόσχεο καὶ κατάνευσον – Thetis goes straight into a forceful string of imperatives. Compare her first appeal (503), where she opened instead with a conditional: “if ever I helped you amongst the immortals, either in word or in deed, grant me this wish”. Not only did the protasis (‘if’ clause) soften the impact of the imperatives by providing more of a build-up, but it also gave Zeus a get-out clause. This time, Thetis wastes no time on such niceties. 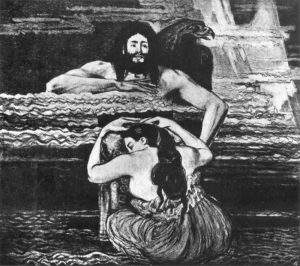 ἢ ἀπόειπ᾽ – here Thetis introduces an alternative course of action, laced throughout with a heavy sense of moral blackmail. The brevity of this phrase gives it a clipped, curt and almost threatening tone.

ἐπεὶ οὔ τοι ἔπι δέος – “since you have no fear”. The implication here, perhaps, is that to refuse her plea would be so morally unjust that any of the lesser gods might fear to do such a thing.

ὄφρ᾽ ἐῢ εἰδέω ὅσσον ἐγὼ μετὰ πᾶσιν ἀτιμοτάτη θεός εἰμι – Thetis uses a ὄφρ᾽ clause in the same position here as in the penultimate line of her first appeal, and this encourages the audience to compare the two clauses. We see that there is a stark dichotomy between them: the first relates to the honouring of Achilles; the second relates to the dishonouring of Thetis. The language is much darker and more threatening in tone, almost like moral blackmail, and this clarifies that refusing her plea would be the worst possible course of action Zeus could take.

ἦ δὴ λοίγια ἔργ᾽ – “this business certainly is deadly”. λοίγια is a strong word, and helps give a sense of the hostility that Zeus anticipates. It also echoes recent mentions of the plague, and this makes its connotations of death and destruction even stronger (Pulleyn 2000:252).

ἐχθοδοπῆσαι – “to engage in hostility” – a striking word. ἐχθοδοπέω is a Homeric hapax (occurs only once in the Homeric corpus).

σὺ μὲν … ἐμοὶ δέ – Zeus uses the antithetical particles μὲν and δέ to emphasise the contrast between what each of them ought to do. Emphatic positioning of ἐμοὶ highlights that it is in his power to act, and his alone.

εἰ δ᾽ ἄγε – from concern and pessimism, Zeus lifts the tone to one of encouragement. εἰ δ᾽ ἄγε signposts this change.

κατανεύσομαι – in describing his nod of assent, he echoes the vocabulary that Thetis used in her command (κατάνευσον, 514).

τοῦτο … τέκμωρ – Zeus now expands on the import of this action. An enjambment makes his words sound all the weightier.

οὐ … οὐδ᾽ … οὐδ᾽ – this tricolon of negatives, each followed by a compound adjective, emphasises the unbending nature of his resolve. The first two adjectives are hapaxes, which makes these lines sound even more important (Pulleyn 2000:256).

Thus she spoke, but cloud-gathering Zeus did not say anything in response to her.
Instead he sat, silent, for a long time. As Thetis lay hold of his knees,
so she held onto him, clinging closely, and she asked again a second time.
‘Promise me infallibly, and nod your head in agreement,
or else, since you have no fear, refuse, so that I know clearly
to what extent I am the most dishonoured goddess of all.’
Cloud-gathering Zeus was vexed in spirit, and he spoke to her in reply.
‘This business certainly is deadly, in that you will incite me to engage in hostility with Hera
whenever she provokes me with her words of reproach.
Even as it is, she always scolds me amongst the immortals,
and she claims that I help the Trojans in battle.
But you – go back home again now, in case Hera finds anything out.
I shall take care of these matters, in order that I may bring them to fruition.
But come now, I shall nod my head to you in agreement, so that you believe me.
For this sign of mine is the greatest sign – amongst the immortals, at any rate.
For whatever I nod my head to is not to be taken back,
nor is it deceptive, nor will it be unfulfilled.’