πρὸς Ὄλυμπον ἴσαν θεοὶ – here we see the gods return to Olympus after their visit to the Aithiopes (Kirk 1985:105). This is important as it is our first glimpse of the world of the divine, allowing us to observe divine habits and quarrels. It also provides an interesting contrast with Book 24, where the book opens on Olympus but then moves back to the mortal world (Pulleyn 2000:246). 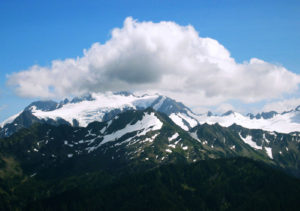 Ζεὺς δ᾽ ἦρχε – Homer is at pains to underline Zeus’s supremacy amongst the gods. The sequence of the gods is phrased in an elegant chiasmus (ἴσαν θεοὶ … Ζεὺς δ᾽ ἦρχε) to highlight the sense of order.

παιδὸς ἑοῦ – “her own son”. This emphasises the close bond between Thetis and Achilles, and Thetis’s resultant keenness to see her son’s requests through.

ἠερίη – principally “early, early in the morning”, but Homer probably also intends for us to think of its other meaning, “airy, misty, ethereal” (as Thetis is rising from the water just as mist would do). As so often, Homer chooses an allusive word so that he can make his account more vivid and suggestive.

ἀκροτάτῃ κορυφῇ – not only is Zeus sitting apart from the others, but he is also “on the tallest peak” – another phrase reinforcing his supremacy.

λάβε γούνων … ὑπ᾽ ἀνθερεῶνος ἑλοῦσα … λισσομένη – a scene of supplication. Thetis accepts her inferiority to Zeus and puts herself in a posture of submission as she begs him for help.

εἴ ποτε δή σε μετ᾽ ἀθανάτοισιν ὄνησα – Thetis’s grounds for seeking help are based on a previous favour rather than any physical gift or offering. Interestingly, Thetis opens with εἴ ποτε, the same formula as Chryses used with Apollo earlier in the book (Pulleyn 2000:250). 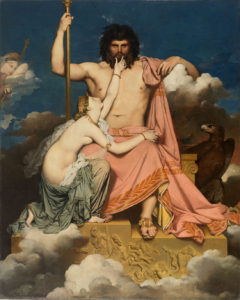 ἠτίμησεν – “he has dishonoured [him]”. Thetis has hit the nail on the head: the argument between Agamemnon and Achilles is all about honour (τιμή – a cognate of ἠτίμησεν). τιμή can often refer to something tangible given to someone as a reward for their services; here, the captive-girl Briseis is that tangible object, and so by confiscating her, Agamemnon is taking away his τιμή. Thetis draws attention to this insult by placing ἠτίμησεν in an emphatic position at the beginning of the line but the end of the clause, and in enjambment.

ὀφέλλωσίν τέ ἑ τιμῇ – lit. “increase him with honour” – a striking periphrasis in place of τιμάω. This is made all the more striking as it is the only example in Homer of ὀφέλλω taking a personal rather than inanimate object.

Now, when the twelfth dawn after that day came,
then indeed the eternal gods all went back to Olympus together,
and Zeus went first. But Thetis did not forget about the demands
of her son, and she rose to the top of the swell of the sea,
early in the morning, and she ascended great heaven and Mount Olympus.
And she came upon the far-thundering son of Cronus, sitting apart from the others
on the tallest peak of many-ridged Olympus.
And here she sat down before him and grasped his knees with her
left hand, touching him under his chin with her right hand,
and begging him, she addressed the lord Zeus, son of Cronus:
‘Father Zeus, if ever I helped you amongst the immortals,
either in word or in deed, grant me this wish.
Honour my son, who of all men is most doomed
to an early death. Now, you see, Agamemnon lord of men has dishonoured him.
For he himself has taken away his war prize, and having taken it, now possesses it.
But you – just pay him retribution, Zeus, o Olympian counsellor.
Give military advantage to the Trojans until such time as the Achaeans
pay back my son, and increase his reputation with honour.