ἀνά … πέτασσαν – tmesis (separation of prefix from rest of verb so that the line fits into the necessary metre). This is common in Homer. 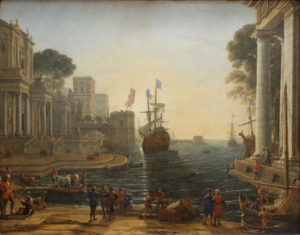 στείρῃ – a curved piece of wood at the very front of the boat.

πορφύρεον – primarily means “dark, purple” but also carries the second meaning “heaving, surging”. Use of allusive words like this allow Homer to paint a vivid picture of the sea whilst retaining economy of words.

αὐτὰρ – this signals a change of subject and draws our attention to the new subject, Achilles.

αὐτοὶ δ᾽ ἐσκίδναντο – there is a curious lack of ceremony to this homecoming, perhaps because Homer wants to set the scene for a return to the brooding Achilles (Pulleyn 2000:245).

νηυσὶ παρήμενος ὠκυπόροισι – the ships are currently stationary as Achilles is refusing to fight (see Overview). However, they are described here as being “swift”. Originally thought simply to be an inappropriate choice of adjective, the current consensus is that it was deliberately chosen to point up the contrast between their current status and what they ought to be doing.

οὔτέ ποτ᾽ εἰς ἀγορὴν … οὔτέ ποτ᾽ ἐς πόλεμον – by saying that Achilles went neither to the forum nor to war (two very different places), Homer emphasises that the nature of his inactivity was absolute. οὔτέ … οὔτέ anaphora emphasises Achilles’ inactivity. 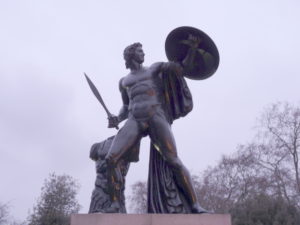 κυδιάνειραν – “bringing men glory or renown”. Striking point – κῦδος is usually one of the main motives behind a warrior’s actions, but it does not list among Achilles’s. Usage of this adjective to describe the noun ἀγορὴν is especially striking as it is the only instance in the Homeric corpus where it is used to qualify any noun other than μάχη.

They raised up the mast and spread the white sails wide,
and the wind made the middle of a sail swell out with air. A surging wave
roared around both sides of the ship’s great stem as it sailed,
but it moved through the swell and fulfilled its course.
But when, indeed, they arrived back at the broad camp of the Achaeans,
they dragged their black ship up onto the land,
high up on the sand, and they stretched out big props beneath it.
Then they dispersed, each to their own huts and ships.
But the godlike son of Peleus, swift-footed Achilles, still sat there
by the swift ships, and cherished his wrath.
Neither did he ever go to the assembly, which brings men glory,
nor to war; no, he stayed there and wasted
his dear heart, though he longed for the battle cry and for battle.