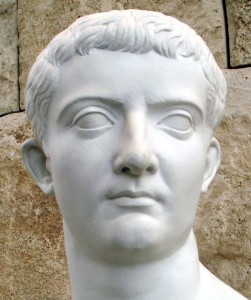 This was the state of affairs in the city, when mutiny came upon the legions in Pannonia, due to no new reasons except for the fact that the change of emperor offered the licence for upheavals and hope for the profits from a civil war. Three legions were stationed together in the summer camp, under the command of Junius Blaesus, who, on hearing of the end of Augustus and the beginnings of Tiberius, had suspended the customary duties for a period of mourning or celebration. With this as the starting point, the soldiery began to run riot, they quarrelled, they lent their ears to the talk of all the worst men, lastly they desired luxury and leisure, they spurned their discipline and toil. There was in the camp one Percennius, once the leader of a theatrical claque, then a common soldier, insolent with his tongue and taught by his theatrical zeal to stir up gatherings. He gradually incited minds which were inexperienced and uncertain what the terms of soldiering would be after Augustus, in night-time discussions or when day had turned to evening and, when the better men had dispersed, he herded together all the very worst.

At last, with others also now ready to be servants of the mutiny, he began to ask questions like someone delivering a public speech: why, in the manner of slaves, were they obeying a few centurions and fewer tribunes? When would they dare to demand remedies, if they would not approach a new and still wavering emperor with requests or with arms? There had been enough mistakes due to inactivity for so many years, since they were enduring thirty or forty years of service until old men, and most with their bodies mutilated with wounds. There was not even an end to military service for those who had been dismissed, but, pitching under the standard, they carried out the same tasks under a different title. And if anyone survived so many misfortunes with his life, he was dragged further to remote lands where, under the name of fields, they received damp bits of marshes or uncultivated bits of mountains. Indeed, military service itself was serious, fruitless: the soul and the body were valued at ten asses a day: out of this came their clothing, weapons and tents, out of this the savagery of the centurions was bought off and exemptions from duties bought. But, by Hercules, beatings and wounds, the harsh winter, gruelling summers, savage war, or barren peace, were everlasting. And no other consolation was there than if military service came under fixed conditions, so they might earn a denarius a day, the sixteenth year might bring an end to their service, that they would no longer be held under the standards, but in the same camp a reward should be paid in cash. Did the praetorian cohorts, who received two denarii a day, who were returned to their own homesteads after sixteen years, undertake more perils? The city watches were not undervalued by them: yet, among terrible peoples, the enemy was seen by them from their lodgings.

The crowd were cheering due to a variety of incentives – some pointing indignantly at marks of beatings, some at their grey hair, most of them at their worn out clothing and naked bodies. At last, they came to such a point of frenzy that they considered merging the three legions into one. Discouraged by rivalry, because each man sought that honour for his own legion, they turned to another plan and placed together the three eagles and the standards of the cohorts; at the same time they piled up turf, they constructed a tribunal, so that the site might be more conspicuous. Blaesus arrived as they were rushing about, and he rebuked and held back individuals, shouting repeatedly: “Stain your hands with my slaughter instead: it will be a lesser crime if you kill a legate than if you desert from your commander. Either, unharmed, I will preserve the loyalty of the legions or, with my through slit, I will hasten your repentance.”

The turf was piled up nonetheless and already it had grown to chest-height, when, defeated by his relentlessness, they abandoned what they had begun. Blaesus, with great skill in speaking, said that the soldiers’ wishes would not be relayed to Caesar through mutiny and disorder: neither had their predecessors made such unconventional requests from the commanders of old, nor they themselves from the divine Augustus; and that the concerns of a fledgling emperor were being aggravated at a hardly convenient time. Yet if they were aiming to attempt in peacetime what not even the victors of the civil wars had demanded, why, contrary to their custom of obedience, contrary to the divine law of discipline, were they contemplating violence? They should appoint legates and issue orders in his presence. They shouted that Blaesus’ son, a tribune, should perform this embassy and request discharge for the soldiers after sixteen years: they would issue other orders when the first ones had succeeded. When the young man set out there was moderate peace: but the soldiery took pride because the fact that the son of a commander was the pleader for a public cause showed that they had extorted through force what they would not have obtained through moderation.

Meanwhile the companies sent to Nauportus before the mutiny began for road-making and bridge-building and other necessities, after they heard about the mayhem in the camp, plucking up their standards and plundering both the neighbouring villages and Nauportus itself, which was the size of a town, attacked the centurions, who were trying to restrain them, with derision and insults, and finally with beatings, their anger chiefly directed against Aufidienus Rufus, the prefect of the camp, whom they pulled out of his carriage and weighed down with baggage and drove in the front of the line, asking him mockingly whether he bore willingly such massive loads, such long journeys. Indeed Rufus, for a long time an ordinary soldier, then a centurion, then put in charge of the camp, was trying to restore an ancient and tough military service, keen on work and toil, and all the more harsher because he had endured them.

Upon their arrival the mutiny was renewed and, roaming about, they began to plunder the surrounding area. Blaesus gave orders that a few, heavily laden with booty, be subjected to flogging and confined in prison to terrorise the rest; for at that point the commander was still obeyed by the centurions and also by the best of the maniples. But the others were struggling with those dragging them off, they clasped the knees of bystanders, now they called on the names of individuals, now each man called on the century of which he was an ordinary soldier, the cohort, the legion, repeatedly shouting that the same fate hung over them all. Simultaneously they heaped insults on their commander, they called heaven and the gods as witnesses, they left nothing undone in order to excite hatred, pity, fear and anger. Everyone rushed to help and, having broken open the prison, they loosened their bonds and now mingled with themselves deserters, and those convicted of capital crimes.

Then the violence was more passionate, there were more leaders for the mutiny. And a certain Vibulenus, an ordinary soldier, having been lifted up in front of Blaesus’ tribunal on the shoulders of those standing around him, said to the men, who were unsettled and intent on what he was contriving; ‘Indeed, you have restored light and breath to these innocent and most wretched men: but who is restoring life to my brother, or my brother to me? Sent to you from the German army concerning our mutual benefits, Blaesus slayed him last night through his own gladiators, whom he keeps and arms for the destruction of soldiers. Answer, Blaesus: where have you thrown away his corpse? Not even the enemy refuses burials. When with kisses, when with tears I have satisfied my grief, order me too to be butchered, provided that these men may bury us who have been killed on account of no crime, but because we were taking care of the welfare of the legions.

He intensified these words by weeping and beating his chest and face with his fists. Then, pushing apart the men on whose shoulders he was being supported, falling headlong and grovelling at the feet of individuals, he excited so much distress and resentment that some of the soldiers tied up the gladiators, who were from Blaesus’ slaves, some tied up the rest of the same man’s household, others poured forth to look for the body. And if it had not become known quickly that there was no body to be found, and the slaves denied the killing even with the application of torture, nor had that man ever had a brother, they were not far away from destroying the commander. Yet they drove out the tribunes and the camp prefect, the bags of the fleeing men were ransacked, and the centurion Lucilius was killed, on whom, with a soldier’s wit, they had placed the nickname “Give Me Another,” because, when his rod broke on the back of a soldier, he used to demand the other one in a clear voice, and again another. Hiding places covered the rest, with only Clemens Julius being held back, who was thought suitable for delivering the orders of the soldiers on account of his quick intelligence. Indeed, the Eighth and Fifteenth Legions themselves were readying their swords against each other, while the former demanded the centurion with the nickname Sirpicus be put to death, the men of the Fifteenth protected him, (and they would have fought) if the soldiery of the Ninth had not added entreaties and, in response to being spurned, threats.