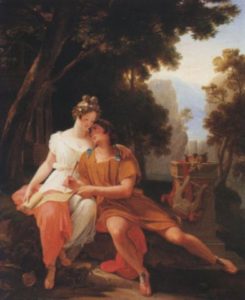 Sextus Propertius was a Latin elegiac poet of the Augustan age. He was born around 50–45 BC in Assisium and died shortly after 15 BC.

Propertius’ surviving work comprises four books of Elegies (Elegiae). He was a friend of the poets Gallus and Virgil and, with them, had as his patron Maecenas and, through Maecenas, the emperor Augustus. 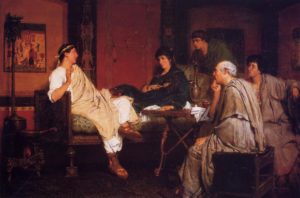 Albius Tibullus (c.55 BC – 19 BC) was a Latin poet and writer of elegies. Little is known about his life. His first and second books of poetry are extant; many other texts attributed to Tibullus are of questionable origins. There are only a few references to him in later writers and a short Life of doubtful authority. His praenomen is not known, nor is his birthplace and his gentile name has been questioned. His status was probably that of a Roman knight (so the Life affirms); and he had inherited a considerable estate. But, like Virgil, Horace and Propertius, he seems to have lost most of it in 41 BC amongst the confiscations of Mark Antony and Octavian. 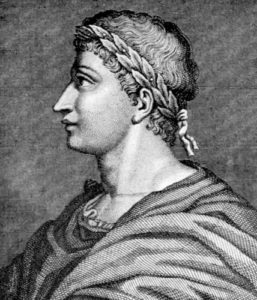 Publius Ovidius Naso (20 March 43 BC – AD 17/18), known as Ovid, was a Roman poet who lived during the reign of Augustus. He was a contemporary of the older Virgil and Horace with whom he is often ranked as one of the three canonical poets of Latin literature. The Imperial scholar Quintilian considered him the last of the Latin love elegists. He enjoyed enormous popularity, but, in one of the mysteries of literary history, he was sent by Augustus into exile in a remote province on the Black Sea, where he remained until his death. Ovid himself attributes his exile to carmen et error, “a poem and a mistake”, but his discretion in discussing the causes has resulted in much speculation among scholars.

The first major Roman poet to begin his career during the reign of Augustus, Ovid is today best known for the Metamorphoses, a 15-book continuous mythological narrative written in the meter of epic, and for collections of love poetry in elegiac couplets, especially the Amores (“Love Affairs”) and Ars Amatoria (“The Art of Love”). His poetry was much imitated during Late Antiquity and the Middle Ages, and greatly influenced Western art and literature. The Metamorphoses remains one of the most important sources of classical mythology.