The Labours of Heracles

He did a bad, bad thing…

Hera sent the goddess Delusion to afflict Heracles with a fit of madness, during which he killed Megara and the children he had with her.

When Heracles realised what he had done, he went to the oracle at Delphi to ask the god Apollo what he should do. But Hera had taken over the oracle and Heracles was told to serve his cousin Eurystheus, king of Tiryns and Mycenae. Eurystheus, now an agent of Hera, set ten tasks, or labours, for Heracles to complete if he wanted to atone for killing his family.

Eurystheus originally set ten labours for Heracles. When Heracles had completed all of them, Eurystheus claimed that two of the labours did not count: the Hydra because he had received help from his nephew Iolaus, and the Augean Stables because he had accepted payment. Therefore Eurystheus set two more tasks – to fetch the Apples of the Hesperides and to bring back Cerberus, the three-headed guard dog of the underworld.

The Temple of Zeus at Olympia 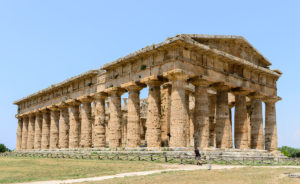 At the sanctuary (holy site) of Olympia, where the ancient Olympic Games took place, was situated the Temple of Zeus. Inside the temple was a huge chryselephantine (ivory and gold) statue of Zeus, one of the original Seven Wonders of the World. The temple is studied in much more detail in the the Temples topic, but the metopes (decorated squares above the pillars) are important for this topic because they are 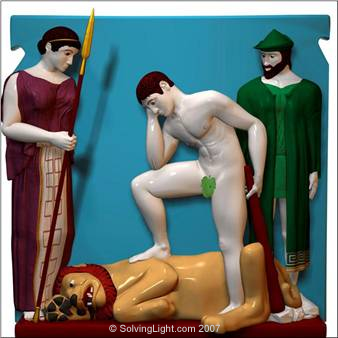 Heracles’ first task was to kill the Nemean Lion, an enormous lion which was terrorising the region of Nemea in the Peloponnese. Heracles spent a whole day looking for the lion. When he found it he fired a shower of arrows, but the arrows just bounced off the lion’s skin. So, he took out his sword and swung it against the lion’s back, but the sword buckled on contact, as though it were made of lead.

Heracles then took his club and thumped it over the lion’s head; this dazed the lion and it retreated into its cave, which had two entrances. Heracles blocked one of the entrances with a net and approached the lion from the other entrance. He managed to strangle the lion just using his hands until it choked to death. He wanted to remove the lion’s skin as he thought it would make a superb defensive suit, but he could not find anything strong or sharp enough to tear it off. Then the goddess Athene gave him the idea to use one of the lion’s own claws to slice through its skin.

Heracles returned to king Eurystheus wearing the lion’s skin and announced that he had completed the task. Eurystheus was so scared to see Heracles that he hid in a storage jar (a pithos) which was buried in the ground. From now on he insisted that Heracles did not come near him and communicated with him at a safe distance, through a messenger. 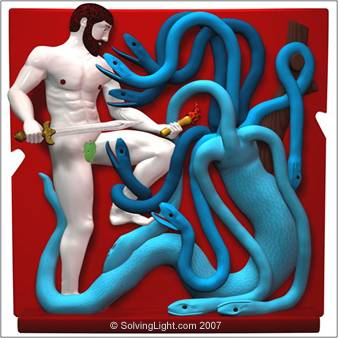 For his second labour Heracles was told to kill the Lernaean Hydra, a many-headed snake-like monster which lived in the swamps of Lerna. He was driven there in his chariot by his nephew Iolaus and was shown the Hydra’s lair by Athene. She advised him to force the Hydra out by shooting it with burning arrows, and when it emerged he battered the heads with his club. But for each head he crushed, two more would grow in the same place.

To make matters worse, Hera sent a giant crab to attack Heracles during the fight. The crab nipped him on the foot, but he repelled it by crushing its shell. He then turned back to the Hydra, still at a loss as to what he should do, so he asked Iolaus for assistance.

Iolaus came up with the idea of holding a flaming torch to the Hydra’s wounds each time Heracles crushed one of the heads. The fire cauterised the Hydra’s flesh, preventing any more heads from growing back. One of the heads was immortal, however, so Heracles chopped it off with a sword and buried it under a heavy rock. He sliced open the Hydra’s carcass and dipped his arrows in the poisonous blood so that they were even more lethal.

Hera rewarded the crab by placing it in the sky as one of the signs of the Zodiac: Cancer. Eurystheus refused to count this Labour because Heracles had received help from Iolaus. 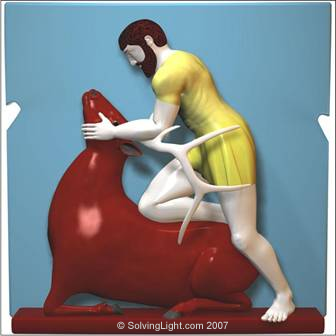 For his third labour, Heracles had to capture the Golden Hind (also known as the Ceryneian Hind). This deer had golden horns, bronze hooves and was bigger than a bull. It was sacred to Artemis, the goddess of hunting, thus Heracles was not able to kill it. Instead he had to chase it for a whole year, from its home in Ceryneia to the mysterious land of Hyperborea far to the north. Eventually the hind was worn out and Heracles caught it to take back to king Eurystheus alive.

On the way, Artemis appeared to Heracles and expressed her anger at what he was doing with her precious animal. Heracles told the truth and explained that he was acting on the orders of Eurystheus. When Artemis heard this, she allowed Heracles to complete his mission, as long as the hind was unharmed. 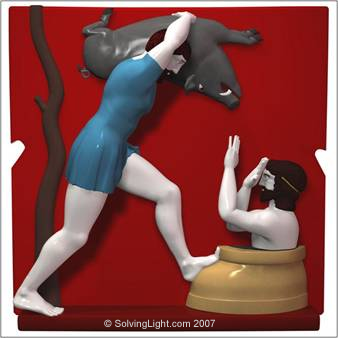 Heracles’ Fourth Labour was to capture alive the Erymanthian Boar, a huge wild pig which killed people and animals around Mount Erymanthus. He found the boar lurking in bushes and managed to force it out by shouting at it. The boar ran around the mountain until it was driven into a deep snow drift.

Heracles then tied up the animal with chains and took it back to Eurystheus, who again hid in a half-buried pithos because he was so amazed and terrified by the heroism of Heracles. 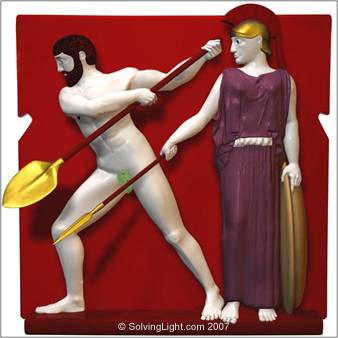 The Fifth Labour of Heracles was to clean the stables of Augeas, the king of Elis, in one day. Augeas’ cattle were immune to disease and incredibly fertile, thus he had an enormous number of cows. The vast amount of dung they produced not only filled the huge stables built to house them, but was also spreading disease over the whole valley.

Heracles swore by Zeus that he would clean the stables before nightfall in return for a tenth of the cattle. Augeas laughed, thinking Heracles would definitely fail, and swore an oath to keep his side of the bargain. Instead of trying to shovel the huge amounts of dung, as Eurystheus and Augeas had imagined he would, Heracles diverted two local rivers, the Alpheios and Peneios, through the stables. This huge torrent of water not only cleared the stables of all the dung, but also the whole valley, so that crops could be grown there once more.

When Augeas was informed that Heracles had been ordered by Eurystheus to clear the stables anyway, he went back on his oath and refused to pay Heracles for his work. To make matters worse, Eurystheus refused to count this task because Heracles had agreed to receive payment from Augeas.

According to one of the many foundation myths of the Olympic Games, Heracles returned to Elis with an army after he had completed his labours and killed Augeas for not honouring his oath. Heracles then established the Olympic Games nearby in honour of his father, Zeus. 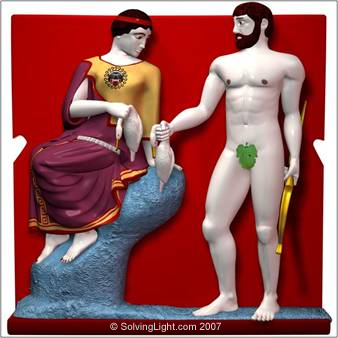 The sixth of Heracles’ labours was to remove the huge number of birds which had flocked to the Stymphalian Marsh. These birds had bronze beaks, bronze claws and bronze feathers. They would take to the air in great numbers, killing people and animals by firing their bronze feathers like missiles. Furthermore, a massive pile of their poisonous excrement had built up, preventing crops from growing in the area.

Heracles had to travel through a deep forest to find the birds, which he could not get close to because of the marsh. The birds were too far away and too numerous for Heracles to get at, but the goddess Athene helped him by giving him a bronze rattle, made by the god Hephaistos. When Heracles shook the rattle, all the birds were frightened into the air. Heracles shot down many with his arrows, or a slingshot; the rest flew far, far away. 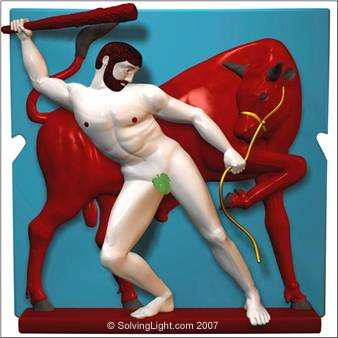 For his seventh labour, Eurystheus ordered Heracles to capture the Cretan Bull, which had been ravaging farmland on the island of Crete. This was the first task which took place outside of the Peloponnese.

Minos, the king of Crete, offered to give Heracles assistance, but Heracles wanted to complete this task all by himself. He wrestled the bull for a long time, eventually getting it into a stranglehold until it submitted.

After he had brought it back to Mycenae and shown it to Eurystheus, Heracles released the bull into the wild. It then travelled to Marathon, where eventually it was killed by Theseus.

The Mares of Diomedes 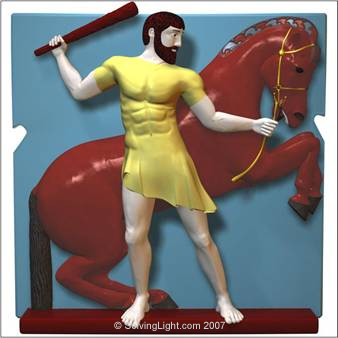 For his eighth labour, Heracles again had to travel to the edge of the Greek world. Eurystheus ordered him to capture the four man-eating mares of the Thracian King Diomedes, who ruled the fierce Bistones. Diomedes had tied the mares to bronze mangers with iron chains, and fed them the flesh of his unfortunate guests.

Heracles sailed across the Aegean to Thrace with a band of volunteers. Upon arrival, they overpowered the stablemen looking after the horses and took the horses down to the sea, where Heracles’ companion Abderos was left in charge of them. Heracles and the others went to fight Diomedes and his army, who were in pursuit since they heard the news from the stables. Heracles, having put the Bistones to flight, killed Diomedes and fed him to his own mares.

Because the horses were no longer hungry, Heracles was able to bring them back safely to Eurystheus in Mycenae. They were then set free until they roamed onto Mount Olympus, where they were killed by wild animals. Heracles founded the city of Abdera where his friend Abderos had been killed.

The Belt of Hippolyte 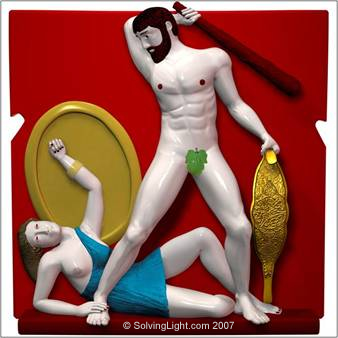 For Heracles’ ninth labour, Eurystheus ordered him to fetch the mythical belt of Ares worn by Hippolyte, the queen of the Amazons. Eurystheus wanted to give the belt to his daughter, Admete, as a gift.

This was the first labour which took Heracles beyond the Greek world, since the Amazons lived on the south coast of the Black Sea, deep inside modern Turkey. He took an army with him again, as a precaution against the dangerous Amazonian warriors.

When Heracles reached the Amazons, he was greeted by Hippolyte, who was impressed by the physical strength and heroic nature of Heracles. When he asked Hippolyte for her belt, she happily agreed to give it to him.

But at the same time the goddess Hera, disguised as an Amazonian warrior, spread a rumour among the rest of the Amazons that Heracles intended to abduct or kill their queen. Enraged at this, the Amazons charged Heracles and his men.

Heracles, seeing the Amazonian army rushing towards him, killed Hippolyte and fought with the Amazons until many were dead and the rest ran away. He then set out with the belt on the long journey back to Mycenae.

The Cattle of Geryon 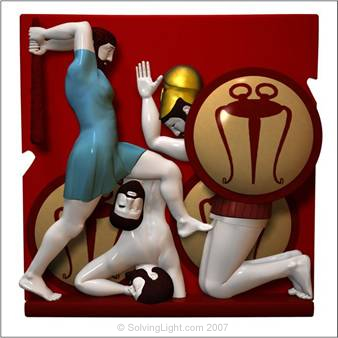 The Apples of the Hesperides 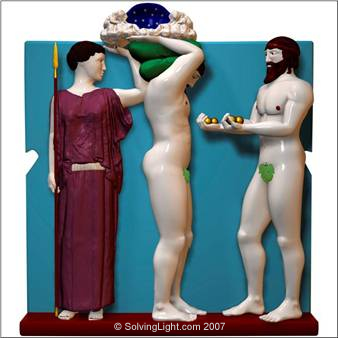 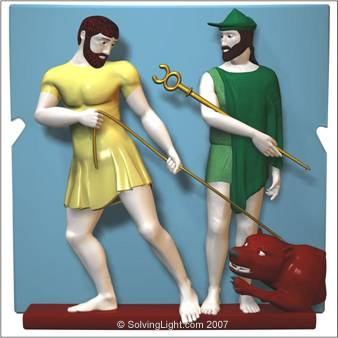 You have already completed the quiz before. Hence you can not start it again.

You have to finish following quiz, to start this quiz:

A superb video about the Labours of Heracles made by Ted-Ed.