Unseens from Latin Beyond GCSE

The Roman general Marcellus grieves over the destruction he is about to impose on the historic city of Syracuse, once opposed but currently allied to Carthage; he fails in his attempt at a negotiated surrender (211 BC ).

Marcellus, when from a higher place he saw lying before his eyes the most beautiful city of all at that time, is said to have shed tears, both through the joy of so great a victory and through pity for an ancient city. For he called to mind the Athenian fleets that had been sunk, and two huge armies that had been destroyed with two very famous leaders, and the many wars that had been waged with the Carthaginians; he called to mind also proud tyrants and wealthy kings; he called to mind finally king Hiero, a very distinguished man of recent memory, who had done very many favours to the Roman people. When these things presented themselves to his mind all at once, and he was reflecting that that whole city was now in a moment of time going to burn and return to ashes, before he moved the standards forwards, he sent ahead certain Syracusans who had been captured and were with him, in order to persuade the enemy to hand the city over to him. At that time however certain deserters, for whom there was no hope of pardon by means of conditions, were holding the gates and the walls; they did not allow the men to approach the walls or to speak to anyone. And so Marcellus’ initiative was in vain. 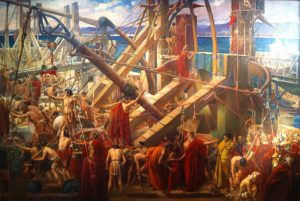 Livy describes the murder of the orator and statesman Cicero, during a period of unrest following the assassination of Julius Caesar (43 BC ).

When he found out that the Triumvirs were arriving, Marcus Cicero had withdrawn from Rome, regarding it as certain (as was the case) that he could no more be snatched away from Antony than Cassius and Brutus from Caesar. At first he had fled to his villa at Tusculum, then he set out to his villa at Formiae, and boarded a ship from Caieta. When adverse winds had several times driven him back after he had set forth onto the deep, and he himself could not tolerate the tossing of the ship, weariness of both flight and life finally took hold of him. And so, after returning to his villa which was little more than a mile from the sea, he said ‘I shall die in the country which I saved’. It is sufficiently agreed that his slaves had been bravely and loyally prepared to fight; but that he himself ordered them to put down the litter and quietly suffer what an unfair fate compelled. As he was leaning out of the litter and offering a motionless neck, his head was cut off; the soldiers also cut off his hands. Thus his head was brought to Antony and by his order placed in front of his two hands on the Rostra where he in that same year had been heard speaking against Antony with such great admiration for his eloquence.

The future Coriolanus distinguishes himself in the Roman attack on Corioli (493 BC ).

There was then in the camp among the leaders of the youth Gnaeus Marcius, a young man ready in both planning and action, whose surname was afterwards Coriolanus. When the
Roman army was besieging Corioli and was intent on the townspeople, whom they were holding shut up inside, without any fear of impeding war from outside, and suddenly Volscian legions which had set out from Antium invaded, and at the same time the enemy had burst out from the town, Marcius by chance was on guard. He with a chosen band of soldiers not only beat back the attack of those bursting out, but fiercely burst in through the open gate: and when slaughter had been carried out in the nearest part of the city, he on the spur of the moment seized a firebrand and threw it onto the buildings overhanging the wall. Then the shouting of the townspeople mixed with the lamentation of women and children, which arose (as usually happens) at the first alarm, both increased the spirit of the Romans and threw the Volscians into disorder. For they thought that the city to which they had come to bring help had been captured. And so the Volscians were routed, and the town of Corioli taken. 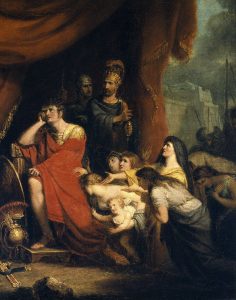 When the Romans in their war with the Samnites are trapped in a mountain pass, the aged Herennius (father of the ememy commander) is asked for advice (321 BC).

When he heard that the Roman armies were trapped between two mountain passes at the Caudine Forks, consulted by his son’s messenger he proposed that they should all as soon as possible be sent away from there unharmed. When this opinion was rejected and, with the same messenger returning, he was consulted again, he proposed that they should all to the last one be killed. When replies so inconsistent between themselves, as if from an ambiguous oracle, were given, although his son himself among the first thought that his father’s mind also had grown old together in his impaired body, nevertheless he was beaten by the agreement of all that he should summon his father in person to give advice. And, not reluctant, the old man is said to have been carried on a wagon into the camp, and when called to give advice spoke in virtually such a way as to change nothing of his opinion, but only to add reasons: by his first plan, which he thought the best, he was establishing lasting peace and friendship with a very powerful people through a huge service; by his second plan he was putting off war for many generations, in which the Roman state after losing two armies would not easily regain its strength; there was no third plan. 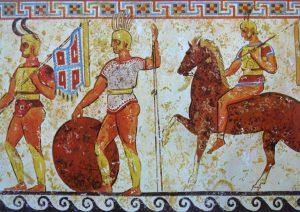